We have some family that recently moved to Nanaimo BC, so we’ve been going to Vancouver Island a lot more to visit them. This journal outlines a day I took exploring the eastern central section of Vancouver Island starting in Campbell River and ending in Nanaimo. I took tons of video and photos of the rivers and underwater footage of the Pink Salmon run in Campbell River.

Campbell River and Quinsam River are popular and easy to access fishing locations.

Oyster River estuary is next to the Pacific Playgrounds Marina in on Saratoga Beach.

Nile Creek is a small flow north of Qualicum Beach. It’s a great place to fish off the beach especially during changing tides.

Qualicum Beach feels like a vacation destination. It’s a long beach with plenty of restaurants, hotels and shops. I didn’t do any fishing here but thought it could be a great place to stay if you were planning a fishing trip in the area.

French Creek is next to the French Creek Ferry Terminal (goes to Lasqueti Island). All around French Creek there are rocky points that offer great beach casting opportunities for Salmon and Sea-Run Cutthroat.

I started the day in a very popular fishing location not far from the river mouth, the spot was just below the Logging Rd Bridge. There were guys lined up here catching Pink Salmon for the smoker (I assume). I found a lot of the anglers here were snagging fish and they were all pretty spooked to naturally bite a lure now, so I headed a little further upriver from the crowd and fished the Quinsam River confluence.

It’s the 3rd week of August and the majority of the Pink Salmon have entered the Campbell River. Chinook Salmon are also starting to move into the Campbell River area (and other nearby rivers) from the ocean (Strait of Georgia). On this date, there were so many Pink Salmon running so I decided to throw my GoFish Camera and get a little of the action. Check out the video below! Saratoga Beach seems like a popular summer vacation spot! The community was buzzing and there was tons of activity around the Pacific Playground Marina. The RV camping spots were all full and it seemed like a great place to be during the summer months. There is also the Oyster River on the north side of the marina and this looks like a great place to target fishing from the beach and perhaps any fishing moving into the lower river on incoming tides. I’ll definitely be coming back to this spot! This tiny creek looks like a hidden gem. There are 2 small parking lots to quickly access the creek and beach area. The first lot is immediately beside the creek on the north side, the next lot is further north up the beach. I saw guys fly fishing for Pink and Chinoook Salmon on the slack tides here. I’m not sure if a lot or any Salmon move up the Nile Creek, but the mouth in the Ocean certainly looks like a holding area for Salmon. This was one of my favorite stops of the day. And I only got to spend maybe 20 minutes at this river. I crossed the river on the 19A highway bridge and immediately pulled over. I decided I would take a few photos as the mouth of the river could be seen flowing into the Ocean. It was a beautiful shot! By some very lucky timing I came at the right time as there were schools of Chinook and Pink Salmon moving into the river from the Ocean on the incoming tide. They were moving up these shallow sections of the river (maybe 8 inches deep) and holding the pool directly below the bridge I was standing on.

It was an incredible sight! To see a dozen 15+ pound Chinook coming up the shallow streams was absolutely amazing, their backs created these big wakes and you could see an entire school of them coming up! Once the Chinooks entered the river pool below they were going wild and driving out the Pinks. I ran and grabbed my GoPro after the first school came in and got some video footage below. It’s not as easy to see on the GoPro but was certainly incredible.

I don’t know much about the Big Qualicum River, but I’ll CERTAINLY be back here for some summer beach fishing in the coming years. Unfortunately, I didn’t get to stop at the Little Qualicum River (just south of this river) because I was short on time, but I’ve heard great fishing and Salmon returns there as well. I have absolutely no idea how the fishing is around this area. I just stopped to take a few photos because it looks like an incredible summer vacation town. A massive beach and place to walk along for hours and hours. There were so many great little shops, restaurants and hotels along the beach. It’s definitely worth driving by if not for the drive itself! This place was busy as there is a massive parking lot, a ferry to Lasqueti Island and marina. On the north side of marina is the French Creek mouth and estuary. On the south side there is a big bay with rocks surrounding it. The rocks are great places to fish for passing salmon like Pinks and Chinooks in the Summer and Coho in the Fall. If I find myself on the island beach fishing in October you can bet I’ll be stopping here. If you’re a beach anglers and looking for some great places to fish off Vancouver Island check out the Van. Island Fishing Locations Tip. 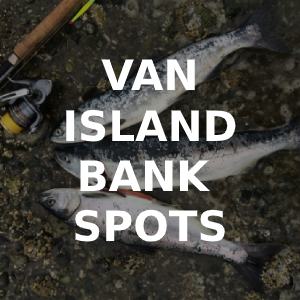 Vancouver Island has some great Bass fishing lakes, especially for Smallies! They arguably have the best bass fisheries in all of BC. If you’re looking for some lakes on the island to target bass, check out our Top 12 Bass Lakes on Vancouver Island Tip.