Terminal tackle is any gear that you tie or attach to the end of your line. It’s the stuff that gets wet. Weights, floats, lures, hooks, leaders, beads, sinkers and spoons are all good examples. In this article I’ll provide an overview on each of these terminal tackle gear and also include the gear that I use and why.

Fishing weights come in a variety of different sizes and materials. Depending on how you’re using them they may also have some different functional components and structure. For example, a barrel weight has a hollow core so you can run a line directly through it and it can slide up/down the line. This photo includes the most popular weights that I use in a variety of waters. I’ll walk through a few of these weights in more detail below. 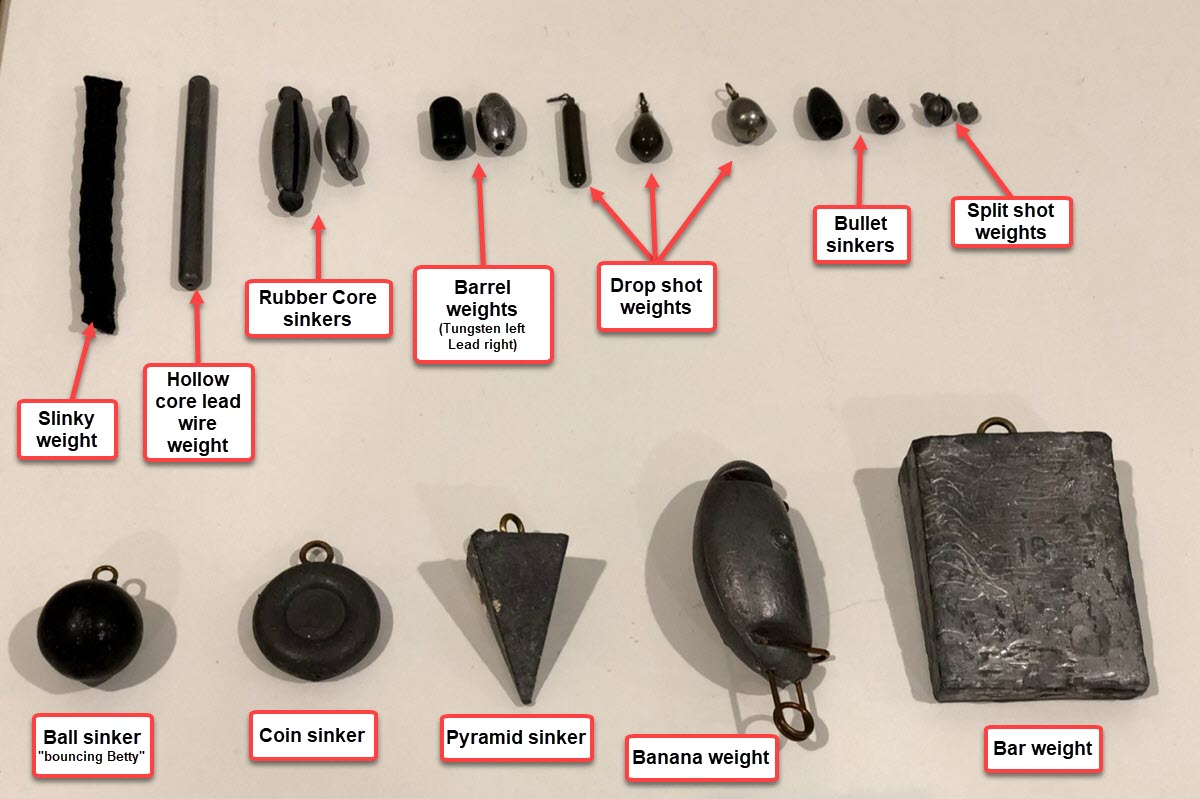 Barrel sinkers, sometimes called egg weights, are usually used to bait fish on or near the bottom of slower moving water. They’re often pretty light, so the fish are less likely to feel the weight when they strike the bait. And, of course, fish will almost always immediately reject the bait if they feel the resistance of the sinker.

The simplest way to use them is to pass your line through the hole in the center of the weight and tie it off to a swivel. Then you attach a leader to the swivel.

This is the most versatile type of fishing weight, and likely the simplest. It’s used for all types of fishing, at all depths. This, and the simplicity of use, is the main reason for split shot’s popularity.

To use split shot sinkers, you must first determine how much weight you need. Then grab as many as you need to reach the weight. Slip the shot over the line, and use fishing pliers to squeeze the shot tightly over it. Attaching split shot close to the bait will keep in near the bottom. Securing it a couple feet above the bait will allow it more freedom of movement for a natural presentation.

Rubber core sinkers are often used in the same situations as barrel sinkers, but they’re a lot easier to attach. They are oval or football shaped weights that are split lengthwise down the center with a rubber strip in the middle. The great thing about them is that they can be added or taken off quickly to tailor your rig to changing water conditions and angling methods.

To attach one, you first slip your line into the groove, just as you would with a split shot. Then you grab a rubber tab in each hand, using your thumb and index fingers. Twist one tab clockwise while twisting the other in the opposite direction. This twists the line with the rubber core for a secure hold.

These sinkers are so named because they’re shaped like common bullets with a hole going through them. They’re most often used in Texas-style rigs, which entails bouncing an artificial worm along the bottom of a lake.

It’s most practical to use only one bullet sinker in a rig, so you have to determine how much weight you need carefully. Stronger currents demand heavier weights. To attach a bullet sinker to your line, slip the end of your mono or braid through the hole in the pointed end of the sinker and pull it through. Then tie your line to your hook, leader or swivel.

Another type of sinker favored by bass fishers, drop shot is a teardrop-shaped weight with a wire loop for tying to line. Drop shot is always used as part of a three-way splitter rig.

Tie the end of your line to a three-way swivel. Tie a length of line from 10 to 36 inches in length, depending on how far off the bottom you want to present your bait, and tie your drop shot to the end of it. Then you tie your leader to the other loop of the three-way swivel.

The pyramid sinker is usually used in saltwater, but it is being seen more and more in slow-moving freshwater streams and backwaters. They look more or less like pyramids, although they can be longer or shaped a bit differently. A pyramid sinker will dig into soft sand when it initially hits it after a cast, but it will scoot smoothly along the bottom on its flat sides when being retrieved.

These weights are most commonly used to keep bait off the bottom, like drop shot, and they’re usually attached in the same way.

Sometimes referred to as bobbers, floats attach directly to fishing line at a predetermined distance above the bait. They’re often used to keep bait suspended at a certain distance below the water’s surface. But they’re sometimes used to allow the current to take the bait to areas that are not accessible by direct casting. I use floats in both still water and moving water, in fact one of my favorite ways to fish a river is by float fishing.

Floats come in a many different sizes and materials like plastic, foam, cork or wood (usually balsa wood). Floats can be fixed or slip styles where they are fixed onto the line or can slide along the line for deeper fishing situations. Other types of Fishing Terminal Gear

You can’t fish without hooks. They do double duty. Hooks hold all kinds of bait to attract fish and trigger them to strike. Then the sharp end of the hook, which is usually barbed, sinks into the fish’s mouth so it can be reeled in.

A fishing swivel is a small attachment with rings or snaps on each end and a pivoting joint in the middle. They’re used mainly to prevent line tangles. You tie your line to one end and your leader to the other. Some swivels are weighted, but others are made to be as light as possible.

Lures: Broadly speaking, a lure is anything that is meant to mimic a fish’s prey in appearance and action underwater. They can be as simple as a small plastic worm or as elaborate as a multi-blade spinner bait. They are generally attached to leaders, which are then attached to the line coming out of the reel. Lures can also be tied directly to fishing line, but they can also be used as part of more complicated three-way rigs with weights.

These come in a variety of styles depending on their intended use. The simplest example is a small wire ring that both line and a leader is tied to in order to join the two components. Snap rings have a safety pin-like attachment to which a lure, hook or leader may be snapped. Three-way rings have three tie-off points for the main line, a weight line and the lure or hook line. A leader is a short length of fluorocarbon or monofilament attached to the fishing line on one end and the lure or hook and bait on the other. It is used for protection from sharp teeth and rocks. Fluorocarbon leader line is more expensive than standard mono leader line, but offers some great benefits of less stretch and is invisible underwater. However, if you’re fishing dirtier or colored up water and not worried about stretch in your line monofilament leader line will is great. For more information on the different types of leaders and materials check out our Fishing Leaders page. 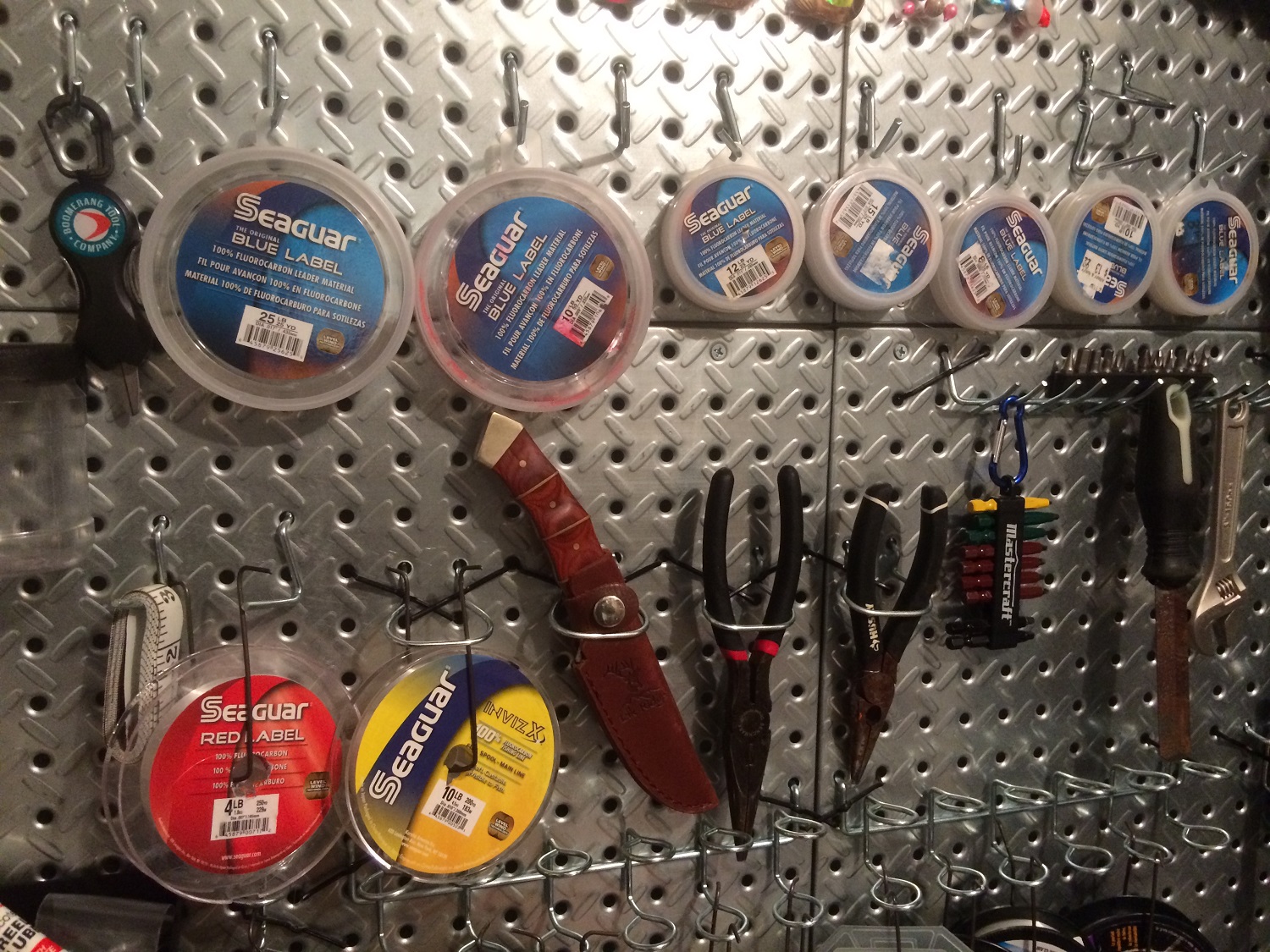